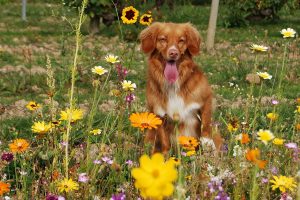 A large number of decorative plants are potentially poisonous for pets. In some cases, the simple contact with them can cause skin reactions, and in others it is eating them that does some sort of harm: from a simple rash to gastrointestinal trouble, neurological disorders, respiratory distress, or cardiac alterations.

Although often the effects last only a few days, a severe poisoning can be fatal for our best friend. The level of danger depends on many factors, such as the dose, species, size of the animal, age, or previous conditions.

The toxins might be in the leaves, stems, flowers, or fruits, ever present, or associated to a certain season, like poinsettias.

Before buying a plant for your home, seek information about it. Be careful as well during walks, and prevent your pet from rubbing against or swallowing unknown plants. We need to be especially watchful with pups, for they nibble everything at hand, and are not exactly cautious with what they get into their mouths.

In face of any symptom of poisoning, such as vomiting or disorientation, ask your veterinarian before you do anything, since the treatment might be different depending on the toxin, breed of the animal, and other factors. If you can, bring a picture or sample of the plant, so the veterinarian can identify it, and apply the right treatment more quickly.

The range of plants that can to be poisonous for pets is so wide that there is no way to mention all of them here. Therefore, we have selected a few that we believe are found more often in our area. For detailed information about these and other dangerous plants, check the bibliography at the end of this article.